
Login
Book A Free Trial
Back to Blog

What Came Before the Piano? 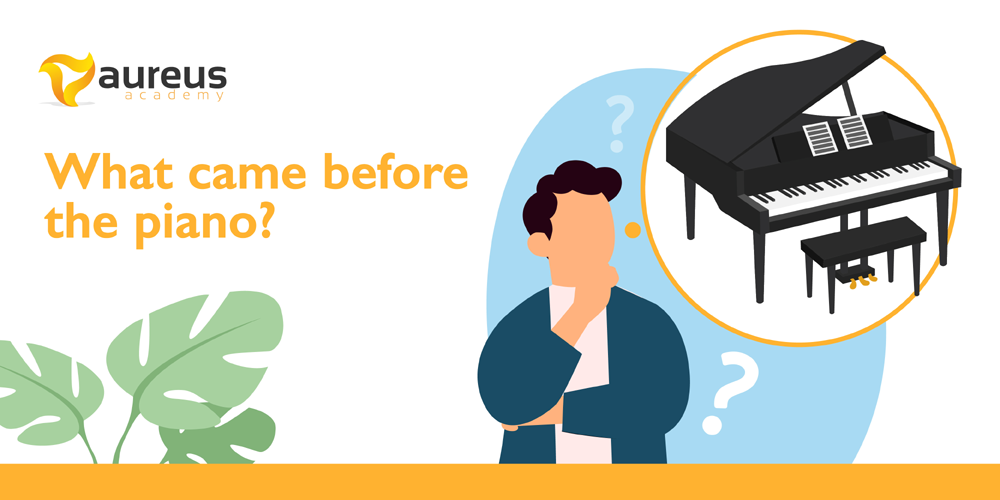 The piano that we know of today is arguably the leading instrument in Western music due to its incredible versatility and powerful sound. However, the modern piano is actually the product of centuries of improvements and experimentations conducted by brilliant inventors and craftsmen. While we admire the wonders of this beautiful instrument, let’s take a look at the variations that came before it.

The Organ
The piano belongs to the keyboard family. The first keyboard instrument ever invented is said to be the hydraulis, or water organ from ancient Greece. This is the predecessor of the pipe organ, whose majestic pipe structures can be found today in some cathedrals or concert halls. The pipe organ produces loud, sustained notes that reverberate throughout the entire room, leaving audiences in awe of its majestic sound. This sound is created by the pushing of air through the pipes in correspondence to the keys that are played on its keyboards. While the organ’s black and white keyboards work like those on a piano, organists would also have to navigate a similar pedalboard with their feet. Besides just pressing keys, there are also countless knobs called stops on an organ that can alter the timbre of the notes played. When you think about organ music, you may recall tunes that send shivers down your spine, such as the theme from the musical Phantom of the Opera, or Bach’s Toccata and Fugue in D, which was featured in the film Dracula. On the other hand, there are works like Mendelssohn’s Wedding March that sound majestic and hopeful, or the light-hearted Cantabile in D Major from Valeri’s 15 Organ Sonatas. The versatility of the pipe organ is truly limitless thanks to its huge range of tonal possibilities.

The Clavichord
While the pipe organ is known to be one of the first keyboard instruments invented, the string element in a piano was first found in the clavichord, a small, portable keyboard instrument which dates back to the Middle Ages. When a key is depressed on a clavichord, a small brass blade called the tangent strikes the string to produce sound. Among all of the predecessors of the piano, the clavichord was the only instrument whereby the player could manipulate the volume produced through their touch on the keys alone. Just like on the piano, the more strength one places on the keys, the harder the strings are struck, resulting in a louder sound produced. As the clavichord produces a soft tone, it is more suited for performances in private settings like in a home rather than in large concert halls. It is a wonderful instrument for smaller chamber works such as keyboard sonatas, or as an accompaniment for voice.

Harpsichord
The harpsichord is probably the first instrument before the piano’s invention that best resembles a modern grand piano. It's much larger size in comparison to a clavichord produces a more resonant sound. This means that it can perform a wider range of music from chamber and solo works to orchestral and operatic works. Unlike the clavichord or piano however, it utilises a mechanism whereby strings are plucked rather than struck. You can think along the lines of how a guitar works! This produces a rich and crisp tone that can be heard in many complex 17th to mid-18th century pieces that have overlapping melodic lines. On the downside however, it takes away the option of dynamic variation as the volume of the harpsichord stays pretty much constant regardless of the strength applied to the keys. Volume differences can only be made by altering the number of notes that one plays rather than through the player’s touch, i.e. the more notes one plays, the louder the sound. Some pieces that were written for the harpsichord include Bach’s Goldberg Variations and Scarlatti’s Sonatas. While these pieces are mostly performed on the modern piano today, it can also be an interesting experience to listen to them being played on the instrument they were written for!

Pianoforte
The very first semblance of the modern piano is the pianoforte (also referred to as fortepiano) invented by Bartolomeo Cristofori. He had sought to rectify the dynamic limitations on the harpsichord in his new invention by replacing plectrums that pluck the strings with hammers. The pianoforte was originally named clavicembalo col piano e forte, which translates to “a harpsichord that plays loudly and softly”. This was the instrument that composers like Mozart and Beethoven would have used in the later parts of their lives. A visible difference a pianoforte has from the modern piano is the lack of pedals. Instead, there were knee levers that served functions such as lifting dampers to create sustained notes. Pianofortes like the one Mozart owned also had a smaller keyboard range of about 58 notes, as compared to the 88 notes on a modern piano. The pianoforte sounds very much like the modern piano, though with a slightly brighter and more open tone. It is also much less powerful in terms of volume. One unique feature on the pianoforte that has been lost on the modern piano is the moderator, which places a cloth between the hammers and the strings to produce a muted, harp-like sound.

Modern Piano
The modern piano differs from its predecessors mainly in the introduction of a massive cast iron frame. This metal plate supports the immense pressure created by the strings in a grand piano. The hammer weight in a modern piano is also heavier, which creates a thicker tonal texture that stands out in grand orchestral works. A greatly improved version of its predecessors, the modern concert grand is able to cover an incredible dynamic range from the softest to the loudest notes that can resonate throughout a concert hall. Composers like Chopin and Liszt would have played on early versions of the modern piano with the 88 keys that is the standard today. This is why music from the late 19th century tends to have notes that spread across a wider keyboard range. The round, powerful sound of the modern piano also sets the path for virtuosic solo piano works like Rachmaninoff’s Prelude in G Minor or Chopin’s Revolutionary Etude. In fact, the rich timbre of the modern piano sound has even spurred composers like Liszt to transcribe multiple orchestral works for solo piano. We hope this article has been an interesting glimpse into the history of how the modern piano came about. If you play the classical piano, perhaps having an idea about the types of keyboard instruments composers had to work with during their time could provide you with more insights when you interpret the pieces that you are working on! Fascinated by the world of piano and keyboard music?

At Aureus Academy, we have highly-educated piano teachers with vast performance experiences and knowledge about piano music. Experience piano lessons at Aureus by booking a Free Trial Lesson and maybe you can become the next Beethoven or Mozart!