
Login
Book A Free Trial
Back to Blog

Celebrating Our Children and Their Remarkable Talents 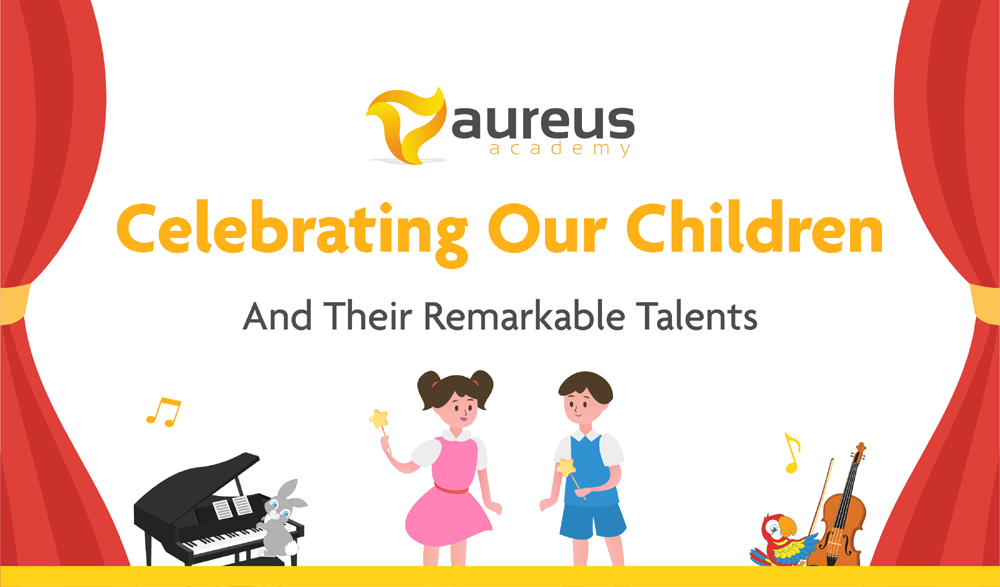 Happy Children’s Day! Today is the day we celebrate children and the joys of childhood! Here at Aureus Academy, we believe in empowering children, who are the future of our world, to excel in whatever they pursue! Over the years, the world has witnessed many musical talents who have achieved amazing milestones at a young age. Let us take a look at some of the musicians who have shown us the wonders of a young mind from past to present!

Wolfgang Amadeus Mozart
Mozart’s first composition written at age 5 One of the legendary names associated with classical music, Mozart composed over 600 works in his lifetime. This would come as no surprise as he began composing music at the tender age of 5! By the time he was 12, Mozart had already written no less than 10 symphonies and even performed for royalty.
‍
‍Vincenzo Bellini
Bellini was an exceptional composer of operatic works, whose music later influenced many famous composers such as Richard Wagner, Chopin and Liszt. He had started learning music theory at the age of only 2, and by the age of 5 he could play the piano skillfully. He composed his first five pieces at the age of 6.

‍Franz Liszt
Termed by many as a rockstar of his time, Liszt was renowned for his virtuosic piano skills and for writing many great, virtuosic piano works. He was recognised as a child prodigy at the age of 6 after being taught how to play the piano by his musical father, and delved into composing at the age of 8. When he was 9, he was already performing in concerts.

‍Camille Saint-Saens
Saint-Saens was discovered for his musical talent when he began picking out tunes on the piano at the age of 3. He played for small audiences from the age of 5 and made his concert debut at the age of 10. Having studied organ and composition at the Paris Conservatory, he went on to become a remarkable organist who played for the famed Church of the Madeleine in Paris.

‍George Bizet
While he received little success during his lifetime, Bizet was later known for his final work Carmen, which has become one of the most recognisable and widely performed works in the operatic scene. As a child, he was recognised as a rare musical genius and got accepted into the Paris Conservatory before he had turned 10, which was the minimum age for enrolment stipulated by the institution.

‍Frederic Chopin
Chopin's works are recognisable by their delicately captivating melodic lines, and the composer’s beautiful pieces are the reason why he has become an important figurehead in Romantic era music. Chopin was in fact born into a musical family and had been inspired by his mother and sister’s piano playing from a young age. By the age of 6, he was trying to reproduce what he heard and making up new tunes. He composed two Polonaises and started performing in the homes of nobles and elites at the age of 7.

‍Sergei Prokofiev
A talented pianist from a young age, Prokofiev composed his first piano piece at the age of 5 and swiftly went on to write his first opera at the age of 9! He was accepted by the St Petersburg Conservatory at the age of 13 and went on to study there for 10 years. Prokofiev wrote many great works across genres, including film music, operas and ballets, such as Romeo and Juliet.

Stevie Wonder
A ‘Little Stevie Wonder’ performance despite being blind from birth and coming from a poor family, Stevie Wonder is recognised for his musical prowess by many, being a skilled singer and player of the piano, organ, harmonica, and drums. He picked up multiple instruments in his childhood and began recording and performing under the name Little Stevie Wonder from the age of 12. Throughout his career, he has gone on to establish himself as a talented musician who masterfully combines various music styles and genres in his compositions.

Alma Deutscher
Given the title “Little Miss Mozart”, Alma Deutscher is a gifted pianist and violinist who began composing music at the age of 5 and released her very own CD at the age of 8! Deutscher was already singing with perfect pitch when she was 2 years old and by the age of 10, she had written her first full-length opera, Cinderella, which premiered in Vienna in 2016.

Chloe Chua
Last but certainly not least, we have a Singaporean prodigy! Chloe Chua is an accomplished 14-year-old violinist, having picked up the piano at the age of 2 and the violin at 4. She rose to fame after her joint win at the 2018 Yehudi Menuhin International Competition for Young Violinists, where her performance of Vivaldi’s The Four Seasons: Winter swept the audience off their feet.
‍
Young Talents at Aureus
We have seen great talent at very young ages here at Aureus Academy as well! One such example would be Victoria Lau, a piano student under our Gifted Young Artist Programme headed by Dr. Nattapol. Since the young age of 4, Victoria has developed an applaudable habit of consistent practice for her passion in music. Now at the age of 10, she has managed to score a High Distinction for her Grade 7 piano exam! It is not everyday that we get to witness a musician at such a young age play with the maturity and musicality that Victoria possesses. Her exquisite playing left our jaws hanging once again in her recent performance of Chopin’s Nocturne in C Sharp Minor at our 8th Birthday Concert.

Conclusion It is truly motivating to see how these amazing musicians started their journey in music from a young age and have gone on to capture the world with their music. It goes to show that age is never a benchmark for musical potential and every child possesses the capacity to reach for the stars!

At Aureus Academy, we have the honour of discovering new budding artists everyday and watching them develop their technique and musicianship under the guidance of our teachers. It is a joy to be a part of their learning journeys and we love to document the growth of all our students. Be sure to check out our Youtube page for more wonderful performances by our young and talented students!